In the time it has taken... 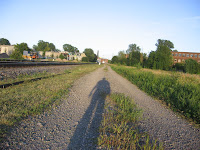 In June I sat down.
They told me to sit down.
My core vibrated with shock.
I thought "He never wanted to die alone".
I cried some.
I was desperate to mourn in a group,
To have and to be a witness.
I flew to where your name was on everyone's lips.
I got drunk on photos, hugs, cigarettes, poems and Fireball whiskey
And flew away again.

In July I listed your faults.
Love and frustration
Stretched my sadness into strange shapes.
I asked why you had died.
I spoke of you to few in fewer words.
I kept you secret.
I looked for you.
I wrote you letters.

In August I forgot you.
I lived.
I slept and woke up,
I ate and did laundry.
You were nowhere in my mind.
Sometimes I felt guilty for it
But mostly I lived.

In September I dreamt of you.
I heard poems by people you had introduced me to,
People who are not dead.
I cried waterfalls.
I composed poems to you as I fell asleep.
In the night I cheated on the father of my child with you, a dead man.

I always felt like your secret lover,
like if they ever wrote a book about you my name would not be in it.

I keep wondering if I would now love you this much if you had lived.
at 7:19 pm