Salmon in the stream, all. 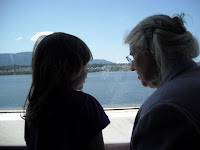 I spoke to my mother on my 36th birthday and she told me that she had experienced a sea-change in her 36th year. A great shift occurred in her life. She left journalism and teaching and began a long and fruitful career in alternative health medicine which she still enjoys doing. She reflected on how I was now going through my own big shift by going back to university and how ironic or fitting it was that I had chosen journalism without realizing the path I was following, the footsteps of my mother that I was walking in - in my own way.
There was a time when I would have screamed and pulled my own hair out rather than be compared to, mistaken for or in any way resemble my mother. Sounds strong to say, perhaps but we really did not get along for a long time and in many ways we are very different. As I get older however the less I mind being like her. Doing things that she has done and gravitating to places she has been. It is fitting in a "completing a circle" kind of way. The more mature I get the more I see my mother as a woman and a human being before seeing her as my mother. I have come to the conclusion that I am not my mother but I am my mother's daughter. And that is just fine with me.
It makes me curious about the road that Monkey will go on and how it will reflect the roads that the women in her family have walked before her. Will she be unlike any of us ever could have ever dreamed to be or will she follow the river we were all born in to the same ocean we all were drawn to? I expect it will be surprising measures of both. I look forward to finding out.
at 12:02 pm