For those keeping score at home...

I have posted my very first personally designed, available to the public, original knitting pattern. I don't know if anyone but me knows how exciting this feels. This is, so far, second only to getting a prize for my writing on the giddy meter.
...
Carry on.
at 2:05 pm No comments: 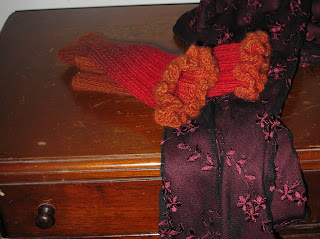 This knit pattern is for dual purpose cuffs. They are fingerless gloves in one direction and ruffled gauntlets in the other. As I always imagined witches to be naturally practical people and the wool I used is Zauberball - zauber being German for magic- Witches Gauntlets seemed like a suitable name.

Cast on 240 stitches.
Join stitches to begin working in the round, being careful not to twist.
Round 1: k2tog to end (120sts)
Round 2: k2tog to end (60 sts)
Round 3: *k4, p2* to end
Knit as in round 3 until work measures 3 inches.
At the beginning of the next round turn work and knit back as follows:
Row 1: *p4, k2* to end
turn work and
Row 2: *k4,p2* to end
Repeat rows 1 and 2 for 1.5 inches (or as much space as you wish for the thumb hole)
Now rather than than turning work at the end of row 2 rejoin work in the round. In other words, do not turn - simply continue *k4,p2* in the round until work measures 7.5 inches or as long as you wish the fingerless glove side of the work to be.
Bind off, weave in ends and block gently.
Make another to match. 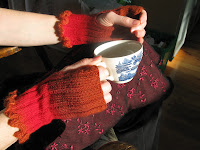 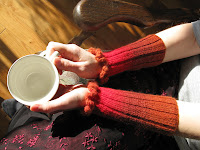 If you like, you can add some tiny buttons and button loops to the thumb hole edge to close it up when you are wearing them as gauntlets.
at 6:20 pm 3 comments:

A Present for Dr Cockroach 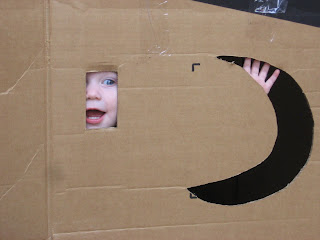 There are days when you have to wake up earlier than you want to...okay, maybe that describes most days. Sometimes, on those days, something really nice happens first thing that makes the whole idea of getting out of bed feel worth it. Maybe your lover wakes you up in a particularly nice way or you get a piece of good news. It may be as simple as the plant on your window sill is finally beginning to bloom. For me, most of the time it is Monkey who does something that makes everything alright that early in the day. Yesterday was no exception.
The perfect breakfast chat.
When recounting these little events to people something is always lost in the retelling. The unrehearsed perfection, the spontaneity and suprise are all a step removed. Not to mention, how could I imitate her tiny, clear voice? Having the luck to record this conversation means nothing but her crystal blue, earnest eyes are left out of the priceless image of the moment.
at 7:45 pm 3 comments:

To me, there are few things more fun than messing with assumptions. When it comes to food I never realized just how hard-wired I was to the look I think food should have until a I drank green orange juice. Before you grimace too much it was a St Patrick's Day lark. My friends and I all made a brunch feast and decided that each food had to be green. So, armed with green food dye we made green pancakes, green syrup, green butter (I think) and green orange juice. None of us could drink the orange juice at first but after closing our eyes and taking the leap we successfully re-wired our minds into thinking that green orange juice was just as tasty are the original color. I won't discuss the health issues associated with food coloring here, just move on.

In the endless pursuit for healthy foods that Monkey will eat I have come to possess a cookbook by Jessica Seinfeld, wife of comedian Jerry Seinfeld, which is called Deceptively Delicious. The principle is that each recipe has a hidden ingredient, most commonly a vegetable or two that fussy children want to avoid. For the child whose preferred vegetables are cucumbers, peas and french fries (not just any potatoes, just the fried ones) this book is a VERY good idea.

The first recipe we wanted to try was "Pink Pancakes." This recipe really messes with assumptions. It contains beets so right away you know they are going to be a funny color but just how funny is a wonder. And man, are they tasty! We have decided they will likely be called "Princess Pancakes" or "Pancakes From the Red Planet" around our house but it falls to Monkey to make the final decision. They will become a regular dish, that is certain.

The original recipe called for pancake mix, which I don't use-preferring to make mine from scratch-and only made a small amount compared what we usually eat. So I modified the recipe and am so in love with the result that I don't think Mrs Seinfeld will mind a little free promotion going her way as I share my modified version with you. If you like this recipe and want to try more "sneaky veggies" recipes (they don't have to be just for kids, you know) run out and pick up her book.

Here is my version: 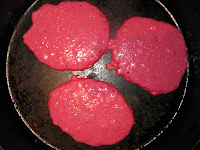 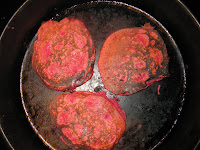 Ingredients:
1 1/4 C milk
1 C cottage cheese or ricotta
1/2 C beet puree (best if you puree cooked beets ahead of time)
1/2 C grated apple
1/4 C oil
1 tsp vanilla
2 eggs
If you want a smoother batter you can put the wet ingredients in the blender but as you can see from the first picture, the "unblendered" version works just fine, if a little lumpy.
1 1/2 C  whole wheat flour
2 tsp baking powder
1/2 tsp salt
1/2 tsp cinnamon (optional)
Mix all ingredients in a big bowl and cook like one does pancakes. If you need help figuring that step out call your mom (or mom equivilant), she probably knows. And voila, red pancakes. Serve with butter and syrup (maple syrup, if you've got it) or omit the vanilla and cinnamon and go savory for lunch or dinner with a spaghetti-like sauce and grated cheese (seriously, try it-remember what I was saying about assumptions). Enjoy!
at 3:39 pm 1 comment: